Recently I went to visit my mother in law. Two cats live with her. I can't say truthfully that she owns the cats. Cats can't be owned. They tolerate.

HERE is Smidgy. Smidgy is a sweet kitty, but should really be called "Smelly". You know something ain't quite right when a cat smells bad. She also makes these sneezy noises and walks like she has peg legs. She doesn't jump up on the couch; she climbs up like Spiderman. 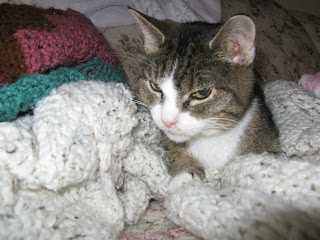 Here is Sabrina. Sabrina is not a sweet kitty. She spits at you when you look at her. She sits in the middle of the floor and spits at you if you walk too close to her. She likes chicken, though. I was eating a piece and she came over. I held a piece out to her thinking maybe she was going to be friends with me, but on my terms. "You'll have to eat the chicken out of my hand," I said. "Just drop it on the floor," said MIL. "She won't eat it from your hand." "She won't get it then. Either my hand or the cat outside gets it." Guess what. Sabrina wouldn't give in. But neither did I. The cat outside (who I did not get a picture of) got the tasty morsel. The rest of the day, Sabrina glared at me from under the chair. Here she is glaring at me. 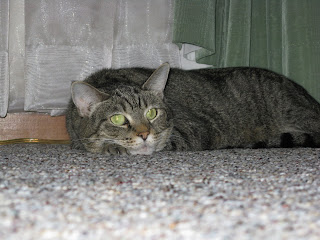 Here are the cats who live at my house. Sox is known as "Old Man Kitty" because he is about twelve years old. Here he is next to the front door. He begs to go out constantly. 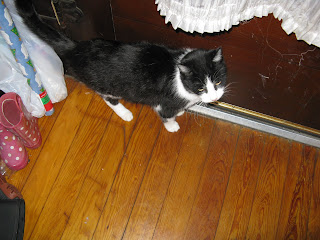 Why does Sox want to go out? To get peace and quiet from: 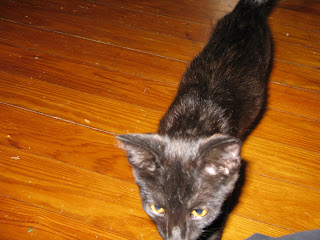 this kitty, Midnight Rose. She was born in May of this year. She wants to play. Sox does not want to play with her. What could we do? We got Midnight Rose a play thing. 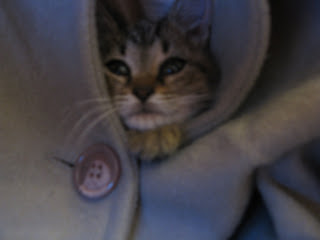 The play thing is called "Tiger Lily". She is only a couple of months old. She is a great play toy for Midnight Rose. They have the same mom, but Midnight Rose is from an earlier litter. They really like each other. 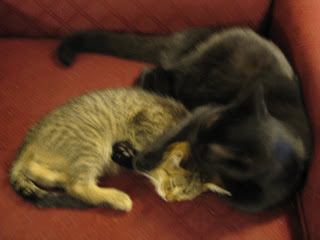