Why Alice In Wonderland? 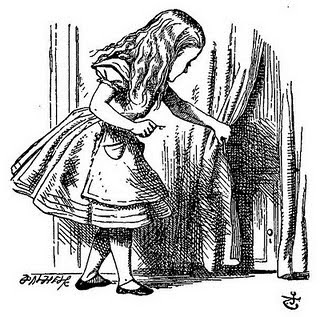 As the release of Double Dog Dare approaches, I thought it would be fun to share with you some of the inspiration behind the story.

I've explained in an earlier post how I placed Cheris, the heroine, in an art gala opening in which she samples cake and punch. These are part of the exhibit from Alice's Adventures in Wonderland. They have the tags from the story which read Eat Me and Drink Me. If you know the story, as most of us do, then you know when Alice eats and drinks, she shrinks and grows. Alice uses the concoctions to get the key to fit into the door in the sort of holding place-the foyer-to her adventure.

Now to tell you the truth, I didn't really like the story of Alice's adventures because it was so insanely crazy. However, it's got some of the best dialogue in any children's story I've ever read. It was this book which gave me the idea of beginning each chapter with a quote from the children's books which would be featured in the art gala opening.

Although as readers, we only witness the Alice in Wonderland Exhibit, there are hints of the other exhibits as well-not only in the story, but in the quotations at the beginning of each chapter.

But for Alice, here are a few wonderful words I used:

I wonder if I've been changed in the night? Let me think. Was I the same when I got up this morning? I almost think I can remember feeling a little different. But if I'm not the same, the next question is 'Who in the world am I?' Ah, that's the great puzzle!

or how about this one which is actually from The Looking Glass?

It’s a poor sort of memory that only works backward.


The quotes all lend themselves to a story-any story-about being in an uncertain place outside of your comfort zone. And if the story is good, then the character blossoms while in that uncertain place and changes for the better.

Here's a little excerpt from Double Dog Dare in which Cheris, the heroine, at the Wonderland exhibit meets Geoff, the hero.

Dressed in a Tuxedo in front of the completely white exhibit, he seemed to belong within the display. His nearly black hair, a little too long, curled at his neck, and he wore small gold rimmed glasses. Cheris glanced around the room to find they were alone. Was this why he thought it permissible to deface the art?

“You’re not supposed to eat that, are you? That’s part of the exhibit,” Cheris advised.

“We’re part of the exhibit.” His eyes glittered in amusement from behind the clear lenses. He held out the cake to her. “Take a bite.”

“I’m not eating after you. I don’t even know you.”

“Afraid you’ll catch cooties? I’ve had all my shots.”

“There is no vaccination against lice, and you don’t catch them by sharing forks.”

“How astute of you. Come here.” He motioned for her to follow him to a row of mirrors. “That’s why there are no characters because we are the characters. See?” He walked to a mirror next to the wall, and Cheris followed. Though their faces were theirs, their bodies had morphed. The man was now The Mad Hatter, and Cheris the Chesire Cat. She smiled in delight.

“Keep your smile, and watch what happens,” he advised.

“Show that gorgeous grin and look into the mirror.”

Uncertain, Cheris glanced at her companion, so tall, next to her. He nodded toward the glass surface, and Cheris turned her eyes back toward it watching in amazement as the fluffy stripped cat disappeared, then Cheris’ own face until only her mouth remained in the darkened mirror.

“Oh.” She breathed the word out.

“I think the appropriate response is Curiouser and Curiouser.”

Attraction for the stranger tugged at Cheris. He seemed familiar to her though she didn’t know why. “Have we met?”

"No, we haven't." He met her gaze in the next set of mirrors. "It appears that I am now the Queen, and you are the Mock Turtle. Can we switch? It's so unbecoming to want to decapitate everybody."

And so begins the Adventure for Cheris and Geoff.