The news is the little rat saw his shadow so its six more weeks of winter. I don't really think a hibernating animal has the ability to predict the weather, but if it gives those people in Puxsatawney a reason to have a big festival and stimulate their local economy, far be it from me to judge.

I loved the movie Groundhog Day and even own it. But I guess I better not wax too poetically about it as my friend Leona seemed to take exception to me blogging too much about The Shining.

Best line from Groundhog Day?
This is pitiful. A thousand people freezing their butts off waiting to worship a rat. What a hype. Well, it used to mean something in this town. They used to pull the hog out, and they used to *eat* it. You're hypocrites, all of you! You have a problem with what I'm saying, Larry?

Or this one is pretty good:
There is no way this winter is *ever* going to end as long as that groundhog keeps seeing his shadow. I don't see any way out of it. He's got to be stopped. And I have to stop him.

Phil Connors: Excuse me, where is everyone going?
Fan on Street: To Gobbler's Knob. It's Groundhog Day.
Phil Connors: It's still just once a year, right?

Phil: Do you ever have deja vu Mrs. Lancaster?
Mrs. Lancaster: I don't think so, but I could check with the kitchen.

And I think we all can benefit from this bit of wisdom:

Phil: [to the groundhog who he's holding behind the wheel of the truck he's driving] Don't drive angry. Do not drive angry.

Excuse me. I have to go salt the ice still loitering on the porch steps and think evil thoughts about the groundhog. 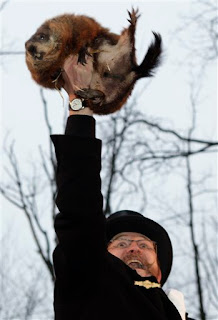