BLEED, BLISTER and PURGE: Medicine in the 1800's

In my novella, SALVATION BRIDE, the heroine, Laura, is an apprentice-trained doctor. I wanted her to be an out of the ordinary woman. And she was. It also made for great conflict. Though he'd gotten himself a mail-order bride, Sheriff David Slade isn't so enlightened as to want a practicing doctor as a wife. Lucky for them both, I don't go into to much detail with the medical stuff. It was the the 19th century, after all.

I remember hearing Dr. McCoy say on one of the STAR TREK movies that the medical care of the late 20th century was barbaric and they needed to get Chekov onto the Enterprise before they actually cut open his skull to relieve the brain hemorrhaging. Mmm, what would the good doctor think if they had landed in the 19th century instead?

For much of the 1800's the common cures for nearly any illness – from Yellow Fever to Consumption – was bleeding, blistering and purging. None of them was pleasant and all of them quite often did more harm than good. 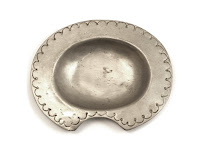 A bleeding bowl, used to catch the blood.
Bleeding came in the form of cutting into the veins or using leeches to bleed the patient. It is suspected that bleeding lead to the untimely death of George Washington from a throat infection by further weakening him. One doctor wanted to perform a rudimentary tracheotomy, to open his breathing below the infection. But other doctors overrode his suggestion as well as his objections to further bleeding.

Blistering consisted of applying caustic agents, such as a mustard plaster, to create blisters on the skin. The blisters were then drained, under the assumption that the blisters would draw out the toxins and infection.

Purging and puking produced the same results, though in different ways. Purging used laxatives to purge the bowels of toxins. Emetics, such as ipecac syrup (something, actually, very useful to have in your medicine cabinet) induced puking—vomiting.

All four of these ancient methods of treating the sick were used because the general thinking of the time was that toxins would be extracted via body fluids. They may have lost some of their luster as the century wore on, but during the first half of the 1800's they had a strong advocate in Dr. Benjamin Rush. Dr. Rush was a politically connected friend of President Thomas Jefferson. When he spoke, people listed and Dr. Rush was a firm believer in Bleed, Blister and Purge.

With the advancement of medical schools and research ides changed. Widely popular through the Civil War, the ancient methods used to purge the body of toxins began to fade. Doctors came to realize that making the patient weaker was not the best idea in helping them overcome their illness.

Thanks for having me today, Jennifer. I've enjoyed doing this post. Anyone who leaves a comment will be eligible for a drawing to win an e-copy of SALVATION BRIDE. I'll draw the name later in the week.