Suffice to say I had an incredible life in and around the 1980s. Oh, the cheesy movies that I love, love, loved! The Flash Gordon movie which came out in 1980 was the epitome of movies which I couldn't get enough of. In the time when VCRs where still a novelty, I actually tape (as in cassette, people!) recorded this movie. 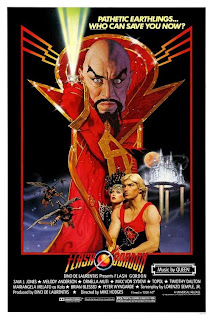 Is that a commentary on my life? That I had nothing better to do than tape record movies off of the TV? I prefer to think that I had such a passion for this movie that I had to capture it; and the only way I could do that was via the tape recorder.

Why did I love this movie so? Isn't wasn't really Sam Jones, who played Flash; it was the whole good vs. evil kind of thing. It was heroes and villans who were larger than life. It was considering that cosmic battles were going on which threatened the very earth we lived on; and of course some gifted football guy could bring all the underdogs together against Ming the Merciless and save the day! 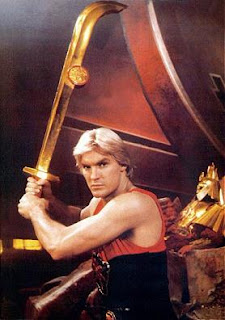 Oh, doesn't he look ready to take Ming on? Bring it on Ming the Merciless! You've messed with the wrong NFL player! I think with the Super Bowl coming up, this is such an appropriate time to bring out our real football heroes! Let us just see any Steeler fight with a whip on a levitating and tilting platform.

Here is Princess Aura. She's that naughty girl who is Ming's daughter. She has an exotic look about her; and an exotic accent to match. And, if anyone can tell me where I can get an outfit like that, I want to know. I think it is exactly what I need for a booksigning! 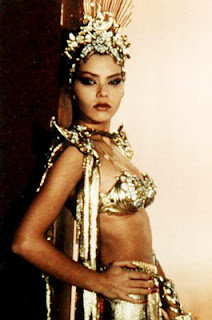 I hate that I don't have more pictures of the movie, but just with these few I think you get the idea of the grandness of it. For anyone who likes Queen, their music is throughout including some great instrumentals. This movie is 1980 for me. Yes, there have been more recent Flash Gordons. Yes, they are not as cheesy, but they also are not as bigger than life with the costumes and the tackiness that only you could have in 1980.
Posted by Jennifer Johnson at 6:39 AM
Newer Post Older Post Home