I LOVE a Parade! 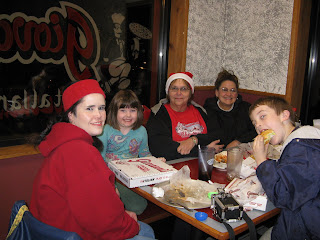 I love my writing group, too! We had so much fun yesterday as we were in the Greenup Christmas parade-Yay! Here we are, the happy parade participants after our parading was done.
Greenup is, like, this big (think small since you can't see me holding my hands up ten inches from each other). It had been decided my mom-mini-van would be in the parade since it could hold more people. My kids were SO EXCITED about being in the parade even though they aren't officially members. If ever any of the folks come over to my house, my kids have to come downstairs, eat up the refreshments and my son can tell them what 60 plus 60 is and then be corrected when he says, "102". HEY, he's only 7, and sometimes he does get the numbers turned around! But I digress. The Christmas parade...
Since we were going to be in the Mom-mobile, I had decided I could open the back gate of the van and the kids and I could sit back there and throw candy if I could get someone else to drive. This would work well as the passenger windows in the back do not open, and my kids were extremely concerned they wouldn't get to throw candy. The parade is all about throwing the candy as in our hometown we got more candy thrown at us in the Christmas parade than what we collected at Halloween.
Fonda agreed to drive. She HATES parades so the very fact that she was there demonstrates her loyalty to KYOWA. We decorated the van with some stuff Cathie brought from home plus a few things I grabbed on my way out. Angie breezed in with a full two minutes before the parade started, and we were on our way!
It was cold, and I think many of the good people of Greenup decided to stay in their heated houses because the crowd was not that crowded. Facing the rear in the rear of the van created a problem as we couldn't see when people were next to the street so we could throw candy at them until we were already past. Quickly I figured when Cathie said, "Want a free book?" she had a spotted a parade viewer so in seconds we WOULD have someone to throw candy to, too. That's right. When the KYOWA chapter of Romance Writers of America is in YOUR parade, you not only get candies pelted at you, but you get romance novels thrown at you as well. Is life sweet or what?
During our decorating of the Mom-mobile, Fonda and I had taped this really obnoxious small singing Christmas tree on the top of the van. Last year I received this tree at a white elephant party. My kids found it, and since then I've been having to listen to a very bad version of "Jingle Bells" any time there is motion or sound near by. My daughter keeps taking it places with her like school and church. I keep hoping she will leave it there as she leaves everything else everywhere else, but the obnoxious Christmas tree always makes it home.
Here it is. Is it not the most hideous thing you've ever seen? 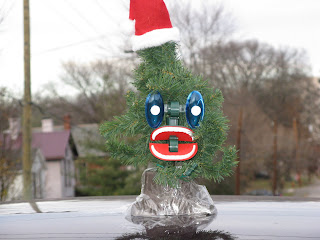 The parade route seemed short. All too soon Fonda made a hard left and the firetrucks didn't follow. We went over a bridge, turned here and there (my kids still trying to throw candy at any excuse). I advised them if you throw candy at people, that is being part of the parade. If you throw it just to throw it, it is called littering, and as we were not in seatbelts, sitting on the open tailgate of the van, and had two small children not in carseats, we really shouldn't push our luck. I considered maybe the parade was over since no one was following us but a golf cart with a wreath attached to the front and not even a dog sat next to the road to catch flying mints. My kids began to scream out threats to the good people of Greenup to come out so we could throw candy at them. Finally, I explained disturbing the peace was also against the law and shushed them. Fonda pulled into the church parking lot where we began, and that was it-my first year of riding with KYOWA in the Christmas parade.
Afterward, we left the obnoxious Christmas tree on top of the van. I hadn't heard it during the parade. That was probably because the firetruck was behind us, followed by the ambulance, followed by another firetruck. And all of them were happily and noisily sounding their sirens.
On the way home in the dark, my son says, "Listen, Mom, do you hear that?" I strained my ears.
"Jingle bells, jingle bells..."
Wow! The obnoxious Christmas tree was singing merrily at 60 miles an hour down Hwy 23.
God bless us, everyone.
Posted by Jennifer Johnson at 12:57 PM
Newer Post Older Post Home