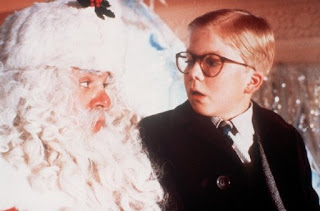 I remember this scene from the classic Christmas movie "A Christmas Story." Ralphie wants a Red Rider BB gun so badly, but his mother dismisses his yearning by saying (Come on, we all know what she said) "You'll shoot your eye out." Ralphie decides he will have to bypass his mother's authority and go straight to the big man himself. Santa. He waits in line for a long time, and when it finally his turn, he freezes. I guess there is so much pressure on a little kid when they are right there with this magical guy who has the ability to slide down chimneys and overcome the space/time continuum (how else could you explain the whole business of going inside every person's house in the entire world in one single solitary night?!). I won't even get into the "Big Brother" disturbing aspect of "Santa Knows" as you probably know how I feel about it if you read my last blog.

Well, I witness this emotional shut down last week as the big guy showed up at a function my kids and I were at. A sweet and rambunctious child named Melanie went to talk to Santa first. When asked what she wanted for Christmas, she got this pained look on her face, and finally asked, "Can I pass for now and let you come back to me?" All the adults awwwed. It was so cute! And, yet, I knew what had happened. Melanie was just a bit starstruck and needed a few moments to collect herself so that she could present the list (as I'm sure she had already prepared it, and most likely added to it multiple times) to Santa.

When it was my son's turn, he didn't really freeze, but he couldn't remember what those robot things were he wanted really, really badly. However, he was able to describe them so he's probably in good shape. Also, he threw in a couple of other toys which he hadn't mentioned before. I wonder if he thought he better name something and, honestly, people can you go wrong with Spiderman? Or, anything that ends with the words "Action Figure"? 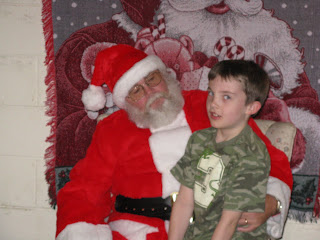 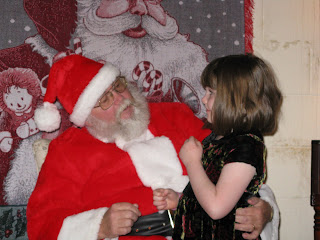 No problem with my daughter. She recalled the two big items she's been asking for all along. She is my little politician as she can schmooze with the best of them. As Santa was getting ready to leave was she digging in her goody bag and unwrapping candy canes to eat? Heck no. She went right up to the jolly guy and wished him a Merry Christmas.
Posted by Jennifer Johnson at 7:25 PM
Newer Post Older Post Home