A Rose by any other name... 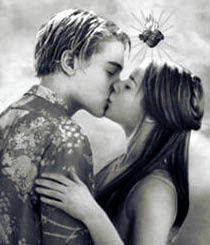 Would still smell as sweet, is a close approximation to what Juliet said as she expressed her sentiments in falling in love with the wrong guy. Here's the actual quote and some of its context:

'Tis but thy name that is my enemy;
Thou art thyself, though not a Montague.
What's Montague? it is nor hand, nor foot,
Nor arm, nor face, nor any other part
Belonging to a man. O, be some other name!
What's in a name? that which we call a rose
By any other name would smell as sweet;
So Romeo would, were he not Romeo call'd,
Retain that dear perfection which he owes
Without that title. Romeo, doff thy name,
And for that name which is no part of thee
Take all myself.

O, MY!! Did Will have a way with words or what??!! And, honestly, if Romeo looked anything like Leonardo, I, too, being in Juliet's shoes would consider the...er...parts of the man which had nothing to do with a name. I contemplate the meaning of a name as I think of this interesting term known as "Domain." It means something now in our Cyber-savvy world which it didn't used to mean. My domain used to refer to what I was in charge of, the territory that I ruled over. Now when people talk about domains, they are probably referring to the territory they call theirs on the internet. I've been looking at Domain names. If I'm going to have a website, I need a name so I can be a master (or mistress) of my territory that is my website. What should it be? It may surprise you to know jenniferjohnson.com and jenniferjohnson.net is already taken. So, what now? Do I add the word "books" to it? It would be more descriptive of the web site. But wouldn't it make it even longer and easier to misspell? Do I wish me dear old mum had named me "Ida Jones"? Is Idajones.com taken? I'll have to check. Anyhow, I don't guess it matters. My two published books aren't published with Ida's name on the cover, but MINE!! Yay!
When I was offered the contract by Wild Rose Press, I did consider a pen name, but I couldn't really think of any name I loved so much that I wanted to have it on my work. If you've read my biography on Wild Rose Press' website, you know I played around with "Francesca Fiore" which is from a Kids in the Hall bit. But her life is so tragic, and again, it wasn't MY name although the drama was fun. And, it was a guy in drag ultimately, so...
I'm still wanting to make the commitment, still wanting to feel good about the decision, still wanting to buy the ring (so to speak). In the mean time, you can go visit my website which is still under construction and not nearly as interesting as being here.
Still.
http://jenniferjohnson.books.officelive.com/
Posted by Jennifer Johnson at 2:29 PM
Newer Post Older Post Home