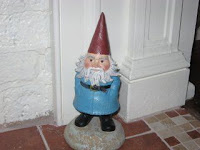 It all started before Travelocity even existed. It all started, actually, when I was in the first grade. My older brother went to Chattanooga on a school safety patrol trip. While there he went to this place called Ruby Falls. If you've ever driven on the interstate-either I 75 or I 85 (not sure which), then you've probably seen these obnoxious signs which say "See Rock City!" or "See Ruby Falls!" They are obnoxious in that there were so many of them. I've noticed there aren't so many any more. Perhaps this is because other people thought there were too many and did their part to lower the total of obnoxiousness.

Anyhow, my brother brought back pictures of his trip which included Ruby Falls, a cave in a mountain in Chattanooga. Inside the cave were gnomes! Oh, I could tell they were just statues, but at six years old, I was enamored by Snow White and her crew and so I thought I'd really like to go to that magical place under ground and see those little guys.

Fast forward about twenty five years. I'm an adult. I live in a tiny Mississippi town. I am bored because the only thing to do in this little town is work and watch TV. I have a neighbor who drinks a lot and is fun to pick on. I overhear him one day quoting a good friend of his. Here is the quote: "Nothing says class like a yard gnome."

Of course, I had to find a yard gnome then and put it in his yard under the cover of night. I just couldn't wait to see his expression when he took his garbage bag full of empty beer cans to the street on pick up day and found a gnome staring up at him. Does it get any better than that?

Unfortunately, gnomes weren't easily found back then. This was before "The Full Monty" (which has some EXCELLENT gnome footage) and Travelocity. The only place I could find them were at one of those places on the side of the road which looks like Cement City. They have all of these tacky things made out of cement. Even yard gnomes. Unfortunately none of them painted. So, I went to Cement City; I bought yard gnomes; I painted them. My brother helped me also in this endeaver by bringing some from a Cement City that HE happened by. My brother-you'd love him because the boy will walk a mile for a laugh. Back to the gnomes. They were so darn cute, I couldn't put them in the neighbor's yard as a joke. He might throw them away, and I had worked so hard on them.

And besides, didn't I deserve a little class in my yard?

Moving to Kentucky and other jostles have taken the gnome count from 3 down to 1 in our yard. Imagine my delight when my daughter and I were in Big Lots yesterday looking for a humming bird feeder, and my eyes fell upon him. A gnome. A yard gnome. In full color.

Needless to say, our yard is twice as classy today as it was yesterday at this time. And just in time too as the house next door is up for sale. Perhaps the yard gnome is just the thing to bring us out of the housing crisis. How could anyone resist buying a house which has gnomes in the yard next door?

Unless those gnomes are IN the yard with the house for sale. Hmm. Maybe I need to make another trip to Big Lots....

Oh! Thanks to my friend Jennifer for the picture of the gnome which really adds class to this blog. Don't forget to check out my slideshow below on gnomes. You'll really feel the love!
Posted by Jennifer Johnson at 6:26 AM
Newer Post Older Post Home