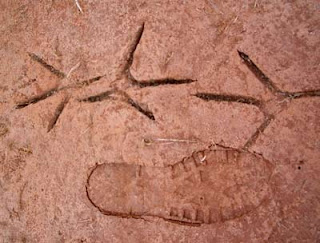 I spent Thanksgiving at my parents' new house in Alabama. For years--decades even--they had talked about buying some land in the country and building a house there. I never thought it would happen until in little bits and pieces it did. First the land was purchased, then some animals, then a house. 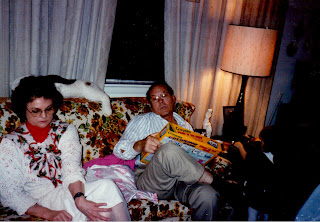 Here're Mom and Dad on Christmas morning probably about sixteen years ago. See my dad checking out the Crayola Crayon activity set. I'm pretty sure it wasn't his.

So what home is has changed. It's not the one on Woodley Road anymore though little treasures from that place pop up at the new location. This time the treasures were one of my spiral notebooks with a few of my unfinished stories inside written in my own hand and a photo album from high school. The pictures are of me as a size five. I remember the size because of the black lace dress I wore to prom with Jody Pounds. Jody and I were never boyfriend/girlfriend though I think the hormonal tension sizzled at times. But I did go to my senior prom with him, and it was the most fun I ever had at a school dance. I think this was because we weren't worried about relationship drama; we just wanted to have a good time.

Back to the new location for home. There's no grass there. Only red dirt. And on rainy days, there is red mud. It gets tracked into the new house with its white tiled floor. I wonder if the parents regret not putting in red bricked floors so that the footprints wouldn't be so prominent. No matter. My daughter had a great time building a burnt sienna Mudtopia outside and using Grandma's Swiffer mop on the inside. Man, that kid had fun.

I thought I'd be sad about not going to the house that I had called home since I was five. Lots of things happened in that house--some bad, some good. Many experiences which shaped me into the woman I am now. I kissed my first boy there--Lane Cook. It was on a dare, and it didn't spoil our friendship. I heard Santa use our bathroom there and received the Barbie motor home (the ultimate Christmas for me, I think). I ate chicken casserole and chocolate bread pudding there. It was there that I learned my parents were divorcing and that my grandmother had died. I smoked my only cigarettes (only a few, and I didn't inhale) there, I read Harlequins under the covers with a flashlight until I finished them even if it was 2 in the morning (hence the flashlight under the covers so I wouldn't get in trouble)there, I wrote my first stories there.

Lots of memories revolve around Christmas. One of our rituals for many years was the Christmas picture. Most of them taken at the house on Woodley Road. It was hilarious and torturous because somebody always goofed up the picture, so we had to have lots of them taken to insure the perfect one could be sent out via Christmas cards. A few I remember we didn't take at the house were taken in downtown Montgomery, one next to a fountain as children, another as adults after a hellacious fight had erupted. But we sucked it up and got the picture made. Mom finally gave up on us after decades of trying to make us do right in the pictures. It was just too difficult getting us all in one place and cooperative. Thankfully, my great nephew stars in the latest Christmas greetings solo. He doesn't seem to mind. The picture below was taken about 12 years ago in the front yard at Woodley Road. I believe this was my brother's truck. Yep. True Alabama style. Christmas picture in short sleeves with all of us posed on the bed of a Ford Truck. Or maybe it was a Dodge. The important feature is the tailgate is down. 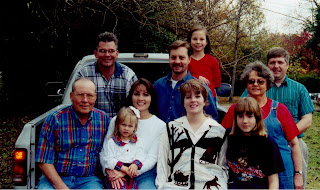 And it was at Woodley Road on another Christmas that I brought the boy home I would marry. I did not know when I brought him home that he was The One though I think my family did. He stayed all day. He wouldn't leave. The sky darkened as evening approached.. My family invited him to look at Christmas lights. They welcomed him and hugged him. Ick. I didn't really know him. I wasn't ready for hugging, but what could I do? My sister--the Daisy Duke look-alike--hugged him, so I felt obligated to do it too since he was sort of my guest.

In spite of that day--or maybe because of it--he called me the week after and asked to come over to where I was attending college and spend MLK day with me. We played Rummicube in my dorm room. We really did play the game. It isn't a metaphor for sex as my BF Jenn accused me of at the time. One thing about Jenn, if you insist indignantly that it really was Rummicube, that just makes her grin and nod her head knowingly even more. 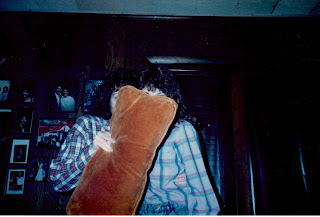 "Daisy Duke" and me. Daisy is the one holding the pillow up to cover our faces. Not only did she look good in shorts, but she has a sense of humor too. We are in the wood paneled 'den' which was the gathering place. One whole wall was devoted to family pictures. 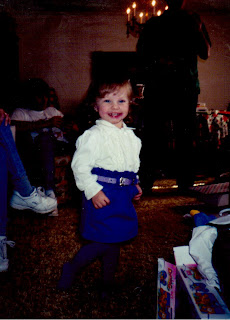 Here is Daisy's daughter who now attends University of Alabama. Look for her photoshopped Auburn shirt amidst the sea of red at the recent Alabama/Auburn game.

The move is appropriate, I think, as my parents are working on their retirement plan, and the new house is part of it. There are still some kinks to work out, like leveling out and grassing over the landscape, but that will come, as the new house has, in increments. And, you know, that's kind of like how life is, too. It happens in bits at a time, as all those moments did on Woodley Road.

And some of them are good though some are not, but you're blessed if you can look at the overall picture, and declare, "Yes. I'm thankful."

So long, Woodley Road. Thanks for the memories.
Posted by Jennifer Johnson at 12:38 PM
Newer Post Older Post Home