My current work in progress is a sequel to The Clergy Affair which takes place in a little town in Mississippi. One of the characters in the book is Granny Ruby who makes her own soap!

I've been intrigued about soap making ever since someone lent me a Foxfire book which told about soap making. Well, it just sounded like something somebody ought to still be doing so I thought Granny Ruby would be a good one to make some soap!

I found a great resource at Farm Gal's website about making soap.

Here's a picture of someone making soap in rural Georgia. The picture caption read, "Emptying grease for soap making." So, THAT's what's in there. Note the chicken which adds ambiance. 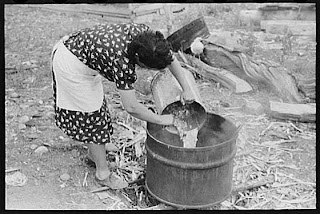 I actually have made soap before, but it was the Hobby Lobby glycerin kind so I don't think it really counts. Not like they USED TO DO IT with hog fat and wood ash. Weren't THOSE the days??!!

I don't want to go to all the trouble of making lye soap, but I'd sure love to get my hands on a homemade bar. I've heard the more stirring you do, the more gentle it is to the skin.

In the story, Ruby's fire for her soap making gets out of hand, and she sets the woods on fire. When I was a very young girl, the woods caught on fire at my grandmother's house. I wasn't allowed to go out and fight the fire, but my brother was. When he came back, he was carrying what was left of his muscle shirt. He had taken it off to beat the fire down. Nothing was left but a bit of material around the arm and neck holes. When my Uncle Billy Joe saw the shirt, he laughed and said, "I hope he wasn't wearing it at the time."

Now see? That's drama. I am now researching if the firefighters would surround the fire with a controlled line of fire to contain it or would they use water? I'm in the middle of the scene right now. It's quite exciting.

Well? What do you think? A line of fire, water, or boy's muscle shirt?
Posted by Jennifer Johnson at 2:34 PM
Newer Post Older Post Home