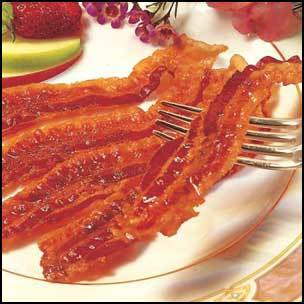 Today I've been thinking about bacon. I love to eat bacon! On a whim I bought some Canadian bacon to put on pizza. But we ended up not using it, so I ate it on a sandwich. It's like ham and yet different-quite tasty! Who knew you could use it on something OTHER than pizza.

I do not think eating Canadian bacon caused me to get sick. I don't know if I had swine flu or if it is another kind of flu. I didn't go to the doctor as I wasn't THAT sick, and I haven't been doing this: 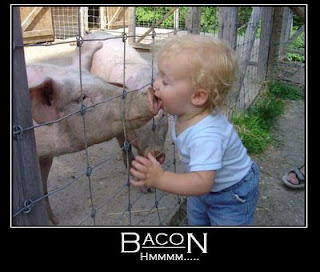 Although there was this time when I was about that kid's age when I shared some of the pig food belonging to a piglet at a petting zoo. I think it was actually Disney World before the Animal Kingdom and when Space Mountain still had those cool diarama scenes on the moving sidewalk after the ride was over. The last time I was there, they had a bunch of lame scenes about futuristic FedEx. Why do they have to change everything!!??

But I digress. I was talking about being sick and suspecting it might be swine flu, and I was leading up to THIS guy: 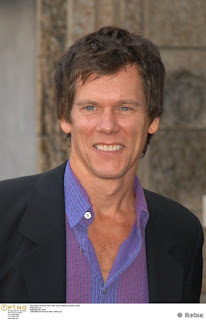 Do you know him? This is a recent picture of him. But the picture below is how I remember him because "Footloose" was one of my teen movies. And you know, you always LOVE the movies and music throughout your life which were popular when your hormones were at their craziest (not counting THE change. That's a blog for another day). 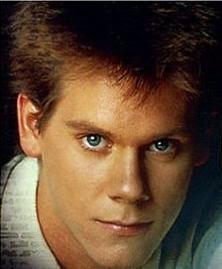 Oh, Kevin, how you inspired a small town to dance and love music again! Oh, Kenny, what wonderful songs you provided and reworked for the musical version of the movie, which was pretty darn good, as in WOW!

A few years ago there was a popular game which involved Kevin and any movie actor you could possibly think of. You know what I'm talking about. You think of any actor and find up to six connections until you get to some movie Kevin has been in. I didn't realize Kevin had been in so many movies. And really, I don't think he has, but what makes the game work is Kevin has a sort of "regular Joe" look to him. He could be any guy you see on the street, except a little better looking. He didn't have a sinister look like William Dafoe or the shocking red hair like David Carradine or the too-pretty look like Pierce Brosnan which maybe pigeonholed these guys into certain roles, or like David C. who thought he could make more money at movies and then you didn't see him for a hundred years until CSI Miami came out, and then he was so cool, you could barely touch him. And with a name like Horatio. That man has ATTITUDE.

Any attitude that Kevin has is something like, "Hey, I'm your next door neighbor", "Hey, I'm just a regular teenager who loves to dance", "Hey, I'm your husband, and I'm not sure I'm ready to have kids", "Hey, I'm the young one, and I'd like to go to the moon,", or "Hey, I'm a psychotic killer that you shouldn't have picked up on the road while I was hitch hiking." See how he can play any of these roles, which is why he does so well in a variety of movies with a variety of actors and actresses. I am no good at the Kevin game, but I love to hear other people play it.

But lately, I've been a participant in this game, and it hasn't been fun. It goes something like this.

Mr. Green, the pricipal, was wiping his nose with a tissue two weeks ago and confessed he'd been drinking lots of fluids to ward off the sickness.

My children come home from school coughing, hacking, and mention body aches. This, however, does not prevent them from trashing the toy room and climbing the dogwood tree in the yard.

One day last week, I realize my head is stuffing up and I have a horrible headache. I get worse. I think I might die, but somehow I pull through.

The secretary where I work emails me yesterday and says she is very ill with body aches and she will not be into work today.

The secretary-I'll call her Linda-is a smoker, not a chain smoker like Gary Sinese was when he played Lt. Dan in Forest Gump, but they do have that in common.

I love Gary Sinese. He also was in CSI, but not quite as cool as Horatio, but he's beter looking so he doesn't have to be. Gary has also been in a bunch of movies. In fact, he was in the movie Apollo 13

You can always trace the flu back to him. I think the contagion has something to do with the name.
Posted by Jennifer Johnson at 5:45 AM
Newer Post Older Post Home