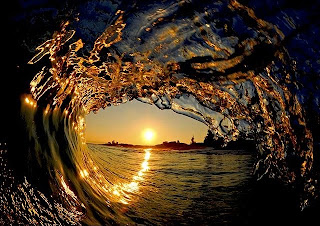 When John was imprisoned on the island of Patmos, he had this grand vision-a Revelation you could call it-of justice and setting things right. One piece of this vision was a paradise in which there was no sea. He wasn't a big fan of the sea because it was the sea which separated him from his homeland and all of his loved ones.

At least on Gilligan's Island, those seven people had each other to befriend or to fight with. And each person on that microcosm of society represented an archetype, a different personality. We know the person we could count on to make the coconut cream pies, the person who would whack the other person with his hat, that person who often needed to be whacked because he was such an idiot, the Robinson Crusoe figure who never figured out the irony of all of his money not being able to save him, the tragic starlet who never hooked up with the smart guy though I thought that was her best choice, and, of course, the Stepford wife.

I think that's all of them.

So I'm considering an island and how 'they' have said no man is one. And what it might feel like to be stranded on purpose by myself. How long until I transition from alone to lonely? Would I be like Robinson Crusoe and become king of a hut full of dumb animals, bitter and resentful of the tarnished and useless coins I pulled from the sinking ship? Might I bloody a volleyball and have arguments with it because there's no Gilligan to bully? Or will I recognize the grace of that Subtle Presence who rode with me out there?
Posted by Jennifer Johnson at 5:29 AM
Newer Post Older Post Home