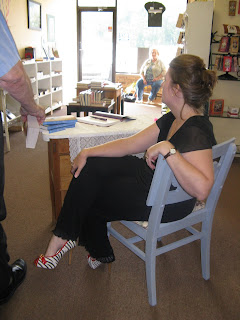 I had my second book signing last night at BJ's Books in Ashland. Why this picture? Well, it shows the shoes, first of all. And I can tell you that in the event, there were several "hits" - the shoes, the peanut butter fudge, and (I hope, I hope, I hope)The Clergy Affair.

The night was a bit different than the fist signing we had a couple of months ago. Different how? Well, Sheri, the owner of the bookstore, had moved furniture around a bit. Because of that people lingered. There were chairs so that folks could sit. It was nice! 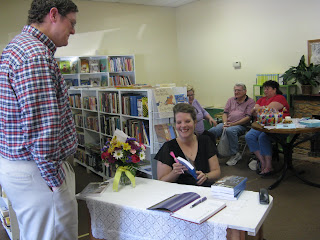 In a lot of ways, The Clergy Affair was me coming to terms with being a romance author. Here is a woman named Deborah who is a little uncomfortable with being feminine and maybe even human. I picked the name "Deborah", by the way, because she was a Judge in the Old Testament, known for her wisdom and also the respect of the community. How will the church respond to realizing that the preacher has a love life? Though there are a few bumps, the biggest obstacle is Deborah herself. The church backs her up. I get that. I have lived that.

I'll restrain myself from getting too sentimental. Let us suffice to say that in every created episode, God looked at the day's events and pronounced each "Good." You can read it in the Genesis account. Even though as a Presbyterian, I'm largely a Calvinist which is to say I believe we're completely depraved, I also have to say in many moments, I have experienced the goodness of people in their love and acceptance. I have been a recipient throughout my life of grace which I did not deserve. Not the least little bit. What if each of us lived in moments of gratitude? What if we realized that we didn't deserve what we're living, but we appreciated the goodness of it anyway? What if?
Posted by Jennifer Johnson at 4:33 PM
Newer Post Older Post Home