Bats in my Belfry 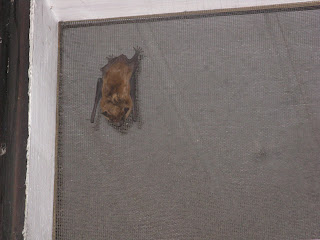 No. Actually the bat was in my transom. Do you know what a transom is? It's a small window above the door. It's found in hundred year old houses like the one I live in. Last night it was hot - like The Long Hot Summer kind of hot (the one with Paul Newman). My husband opened the transom and promptly left the room. I was in the parlor (yes, we DO call it the parlor) and saw the dark fluttering through the air -back and forth.

Let me pause here to say I love bats because they eat bunches of mosquitoes (which I do not love). I've built bat houses. I've stayed out of caves to protect their habitat, but

EEEEEEEEEKKKKK! THERE'S A BAT IN THE HOUSE!!!!

Somehow the little guy had gotten into our transom, and when it was opened to let in some cooler evening air, well, here came the bat as well. After some tense moments, the bat was contained and taken outside where it was thrown in the air. Of course, it took off like a bat out of....er...like a bat recently released. Later I discovered a small tear in the screen where it meets the frame.

Transoms are cool. Our transom lends character to our already cool (as in attitude, NOT temperature) house. My friend Mary wrote a scene in one of her stories in which a woman gets caught in a transom. She entered it in a contest and lost points because the judge didn't know what a transom was!

We've had other adventures with our transom since we've lived here. I myself have never tried to use it as an entrance, but I have lowered a kid through it.
Posted by Jennifer Johnson at 5:32 AM
Newer Post Older Post Home