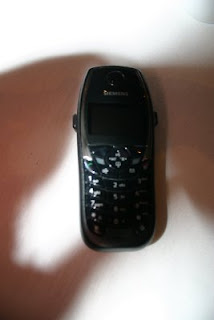 Life often interrupts my well laid plans. Here was my well laid plan yesterday. I was interviewing someone for a job. I worked it out so the kids would be Kung Fuing during the interview. It was brilliant! I had the children in the Mom mobile when my cell phone rang.

It was a stranded motorist who happens to be married to me. Could I come get him?

Well, yeah, but....I have this interview and no number to call to let the person know I was going to be late. All my papers were waiting on me in an organized stack at the office. What to do?

I called my colleague who was also helping conduct the interview. At least, I thought I was calling her. I don't have her in my "name" directory in my cell phone, but she had called me the day before. No biggie. Just look on the menu for the received calls.

Except for lots of people called me yesterday apparently. I started calling numbers and playing it cool hoping I could identify the voice when they said, "hello" if it wasn't my interview buddy.

After the third wrong number, I quit playing it cool and began confessing-sort of.

"I'm dialing numbers randomly on my cell phone. This is Jennifer. How are you?"

And I had some great conversations, but never with who I NEEDED to call. It all worked out. My interview buddy showed up to meet the interviewie, I got there late-but not terribly. We interviewed. It rained torrentially. The stranded motorist was no longer stranded, and I got to catch up with some folks on the cell phone without wrecking the car.
Posted by Jennifer Johnson at 8:33 AM
Newer Post Older Post Home