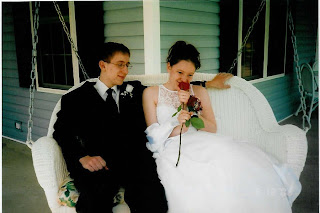 I've been thinking about porch swings this morning. I love this picture of two young people perhaps on their way to the prom.

A porch swing is not just a piece of furniture you sit on when you sit on a porch. At least, not in a book. When you put a person or persons on a porch swing, you are creating a setting for them.

Here is a little piece of a scene from The Jinx:

The swing swayed back and forth, and Ellen found herself leaning up
against Rick her feet tucked underneath her and his arm around her
shoulders. A loud chorus of cicadas outside competed with the whir
of the porch’s ceiling fan. Contentment settled around Ellen like
a comfortable quilt. She imagined sitting out here with Rick every
night.

This scene establishes that Rick and Ellen are homebodies. One of the reasons the relationship is going to work is that they enjoy quiet evenings together at home. As a writer and a person, creating a couple with similar values is important to me because it means they are going to live happily ever after. That is to say, they are going to grow old together and celebrate their fifty year anniversary. It's subtle in the book, but those similar values are there.

Here's another little piece from The Jinx in which Rick is on a date with another woman:

“What’s wrong, Rick honey? Someone walk over your grave?” Maggie smiled, showing a set of perfect white teeth. “That’s what they say when you get the shivers.
Have you ever heard that?”
“I think so,” he said before taking a long sip of beer. She insisted he pour it
into a glass. He hated drinking a beer from a glass. It seemed to be putting on airs. It’s a beer. Dress it up in a pretty glass, and it was still a beer.

We know this relationship is NOT going to work because of this little issue of how to drink one's drink. Later in the book, we find Ellen, Rick, and Ellen's roommate Stephanie who tends bar.

Stephanie came up just then. “Hi, Rick, isn’t it? We haven’t formally met, but I’m Stephanie, Ellen’s roommate.”
“Hello, Stephanie. Nice to meet you.”
“Can I get you a drink?”
“Is that what you’re having?” Rick asked Ellen,indicating the bottle in front of her.
“You can’t beat it.”
“I’ll have what she’s having.”

Again, it's subtle but it's a clue that these two are not pretentious, maybe a little red around the neck, but it works because it establishes a similar taste.

Especially with alcohol, I think you have to be careful about its role in a story because of the obvious abuse issues, and if a character drinks too much, or gets drunk and does stupid things, the reader may lose the empathy they have for them and put down the book. I never realized before someone pointed this out to me, but did you ever notice how much Darrin drank in Bewitched? I mean, the guy was always hitting the sauce. Of course, if I had in-laws like he had, I probably would want to be drunk most of the time, too. Still. The writers of the script wanted to establish that Darrin's life is difficult and that getting drunk seemed (for him) the only alternative. This may be also because one of the actors (whether Dick Sargent or Dick York. I STILL can't get those two straight) had severe back pain a lot of the time before he quit the show so maybe he needed a drink to dull the pain and they just worked it into the script. But the point is, in a half hour show, you don't have a lot of time to establish mood, so going for a drink is a quick and easy way to let the audience know once again Darrin is overwhelmed, can't handle reality, and should have considered whether marrying a witch was such a great idea before he married her. Elizabeth Montgomery was really pretty, but was she worth putting up with Endora? If Darrin had left Samantha, you know they would have incinerated him, so what choice did he have? Basically to stay and keep a well-stocked liquor cabinet. 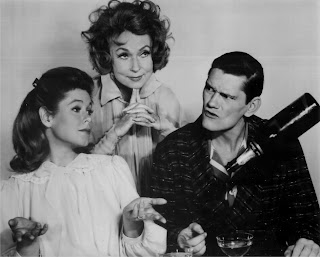