of course, of course. I missed the Derby!!Oh, the horses! Oh, the lovely, lovely people. I even had a good friend to bring me a Mint Julep recipe. Jan Scarbrough had been blogging on the Derby all week. She obviously loves horses, and had as a favorite Rachel Alexandra. Here's her blog about it:

I commented, and YAY! I won a download of one of Jan's books-Kentucky Woman! It's downloaded and ready to read. I am now reading an anthology which includes The Reunion Game, a story by Jan. I bought this book at Dogwood last weekend, and have read two of the four stories in it. Magdalena Scott's story is next in line!

Mine that Bird (a gelding) was the winner! One of the things I learned from Jan is that is it a bit unusual for a gelding to win. And the Jockey's name? Calvin Jorel. Love that name-Calvin. It's so...er...Calvinist. 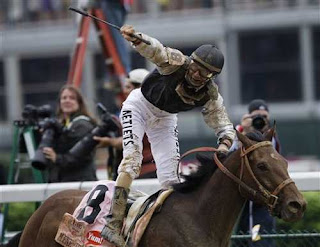 I watched a replay of the race. Mine that Bird was in front before the announcer even mentioned his position. In fact, the guy paused before he announced Mine that Bird, as if he didn't even know who it was! And he probably didn't. Mine that Bird was 50 to 1! He and Calvin came out of nowhere and WOW! won by several lengths. It wasn't even close. I watched the replay several times to see how all of the sudden they could have just been out in front like that. It was quite exciting.
Posted by Jennifer Johnson at 6:02 PM
Newer Post Older Post Home