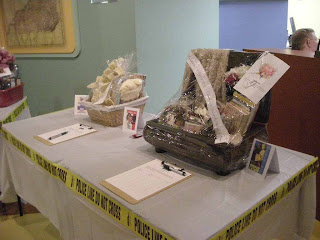 KYOWA, our local Romance Writers of America chapter had a beautiful presence Saturday night at a mystery dinner theater in Ashland, Kentucky. The play, called Killing Mr. Withers, was an interactive experience. Those of us dining had the chance to solve the mystery of who killed...not Mr. Withers, but Rebecca Postman. They acted; they danced; they sang. At one point, they even pulled members of the audience up for a Conga line.

Guess who got to do the Conga?

That's right. Yours truly. I think I was just so stunning in my black suit with my peacock feather shiny shirt, they couldn't resist me. The play billed itself as "an interactive murder-mystery celebration of the Master of Suspense". Can you guess who that Master is?

Alfred Hitchcock. Throughout the night we the audience were to write down all references to Hitchcock movies spoken by the actors. Cool!

I did not rightly guess "whodunit". But, thanks to our local chapter and the incredible work of Fonda who put a basket together for the Silent Auction, sixty-five extra bucks went to Neighbors Helping Neighbors. Great job, KYOWA!

The whole night, actually, was a fundraiser for this "vision". Here's a website to learn more about it. www.nhn-ashland.org

Are you a Hitchcock fan? I loved his T.V. show greatly, and my favorite one was called "Bang! You're Dead" (1961) and had a very young Billy Mumy in it. He carries a loaded gun throughout the episode playing cowboy. Oh, the tension!

To Catch a Thief, of course!! You absolutely cannot beat Grace Kelly and Cary Grant on the screen. Oh, and those fireworks! I think about that scene whenever I'm writing a love scene. It reminds me that you don't have to be explicit to get the point across.

Here are some lines from the movie:

Frances Stevens: I called the police from your room and told them who you are and everything you've been doing tonight.
John Robie: Everything? The boys must have really enjoyed *that* at headquarters!

John Robie: Say something nice to her, Danielle.
Danielle Foussard: She looks a lot older up close.
[John Robie whimpers]
Frances Stevens: To a mere child, anything over twenty might seem old.
Danielle Foussard: A child? Shall we stand in shallower water and discuss that?

You see? Humor. Suspense. Grace. Cary. Hitchcock never did better than that in my opinion.

Honorable mentions: Strangers on a Train (scarier than Psycho! and I love the modern version also - Throw Momma from the Train). Also Notorious - Cary Grant and Ingrid Bergman. The Man who Knew Too Much - Doris Day and Jimmy Stewart. I think the first song on my playlist, sung by Doris Day (love her!) is from that movie.