Here as in many other towns we celebrate our nation's birthday by having a great big festival. Ours is called "Summer Motion", and, oh boy, has it been fun. We have free concerts every night. Last night Mickey Dolenz from the Monkees sang. We didn't go to the concert, but we live close enough that I could hear some familar tunes from my childhood. This afternoon we watched REAL smack down wrestlers with plenty of trash talking going on. I guess the wrestling was perhaps symbolic of the butt kicking we gave England when they tried to be the boss of us.

But, you know, nothing says Independence Day more than paying three dollars to see "Ratzilla", the world's largest rat. Well, actually it only cost two dollars to see Ratzilla. It was an extra dollar to see snakes who possibly could have eaten Ratzilla. I'm a bit suspicious about Ratzilla, as he didn't have a tail. Here's what he looked like. 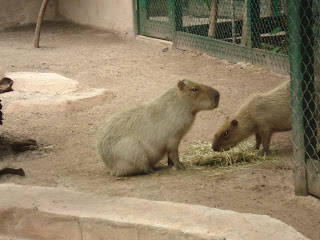 I found this picture when I did a search of "Calybara", so I'm thinking I paid two bucks to see a Calybara, and I don't feel that I have been robbed. Not exactly.

Now, if it had had a rat tail, that would have really been something. Earlier this week, I heard a cat making loud mournful sounds outside. I figured it was one of mine, so I opened the door and froze because I saw this: 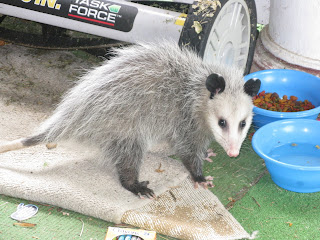 This little guy was eating cat food on our porch. The mystery was solved as to why our cat was so sad as she stood in the yard watching a possum scarf down her meow mix. What to do? Grab the camera, of course. Now you can't tell from the picture, but a possum has a really gross rat tail. Other than that it was kind of cute, and I resisted the urge to go pet it I was reminded of one time about thirty years ago I had another encounter with a possum in a bag of dog food. Well, I think my mom had the initial encounter, but we went running out to the storage house when we heard her bloodcurdling scream. As she reached in the fifty pound bag in the dark room to get some food for the pooches, she must have grabbed a handful of possum fur. When a possum is threatened, it sometimes plays possum. Not the dogfood bag one though. He hissed like a cat. Luckily my cousin James was over at the house at the time. He took the possum by the tail and slung it into the neighbor's yard. How insulting for the big rat! All it was doing was getting its dinner!


We're off at dark to see the fireworks. Lest you think I have no patriotic fervor, let me tell you I've had this ditty going through my head most of the day. As a child of the seventies, some of my learning was thanks to School House Rock, cartoon shorts that came on Saturday mornings in between the "real" cartoons. These many years later, I give School House Rock credit for knowing grammar, multiplication, and U.S. history. Can you believe I get teary when I hear school house rock songs? Below you will find how I was able to memorize the Preamble.