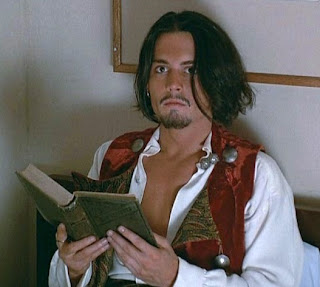 Whether you're part of a couple or not, Valentine's Day tends to make you think in terms of romantic love. What kind of romance author would I be if I didn't at least give a nod to this holiday? So, I'll give you some insight into what makes me sigh. Note the picture above.
This is Johnny Depp as Don Juan DeMarcos. You've probably never heard of the movie, which I think came out around 1994, but it is WONDERFUL. The soundtrack is also very beautiful, and this piece from my playlist is my favorite from it. Now, in the movie, this piece is playing while Don (Johnny) is telling the psychiatrist (played by Marlon Brando) how his parents met and fell in love.
Why I love this movie:
1. Johnny Depp
2. The appreciation for the thin line between truth and fact. Because although some things are not factual, they can be very much truthful.
3. A wonderful portrayal of the struggle of moving into retirement (surprised you, didn't I?)
4. The passion of good story-telling
5. Johnny Depp
6. Romantic love that spans decades
7. The scene in which Don Juan takes a woman's hand in the restaurant scene and talks euphemistically. As a romance writer, that scene alone is worth the price of the movie.
7. Did I already mention Johnny Depp?

Other things that make me sigh in the good way. Note my second song on my Playlist: Harry Connick, Jr.

He's a good southern boy; his crooning gives me goose bumps; and he has a real gift with the piano keys. Not bad to look at, either.

Fourth Song: The Cure's I'll Stop the World and Melt with You. Although Burger King stole this song to make me think of a Whooper, I love the sentiment of it. And I LOVE the humming at the end. Not a lot of musical artists can get by with humming, but The Cure can. So much talent!

Do you love that picture of Johnny in his Don Juan get-up reading a book? Oh, and just to let you know, I am not in love with Johnny Depp. I only appreciate his handsome good looks as one might admire a snow globe just shaken. I also admire his boldness in eccentric role-playing in movies. However, if my husband ever decides to leave me, I shall engage in some adolescent acts of revenge on him. After that, I call dibs on the Depp.
Posted by Jennifer Johnson at 7:22 AM
Newer Post Older Post Home