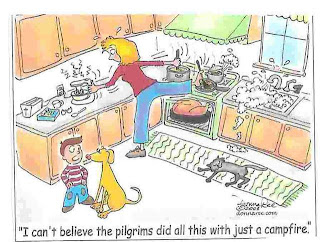 The stores have been crazy busy. I'm sure you know. You've been right there with me trying to find a parking space, resisting the urge to ram that cart some lady has left IN THE MIDDLE OF THE AISLE as she is perusing the baking powder and baking soda, trying not to scream bloody murder because I'm already at the front of the store and realize I need butter which is like two miles away in the dairy section, frantically scanning the parking lot because I don't remember where I parked.

Every news guy and D.J. says we're in a recession. Have they looked at the parking lot at the mall? I don't think the people here realize it. They're shopping like crazy. Every cashier looks worn out already.

I'm doing my bit for the economy by buying ingredients for a mainstay of Thanksgiving. The sweet potato casserole. I am going to my MIL's house for the holiday. She lives in Ohio. It is not the south. How do I know this? They don't eat grits. Yes. You can buy them at the store, but the boxes are dusty. I'll tell you this. No grits box in Alabama stays on the shelf long enough to collect dust. We buy our grits. We eat our grits. And don't be pulling out that little envelope of "Instant Grits". That's just insulting. We buy the quick grits, measure out the grains, cook it, and add loads of butter and/or cheese. And also salt.

Even though my mother-in-law appreciates Southern cooking and is letting Paula Dean cater the meal, THEY DIDN'T GET SWEET POTATO CASSEROLE AS A SIDE!!! As far a food goes, there are staples to the Thanksgiving meal (according to me). Here they are turkey, stuffing, mashed potatoes and giblet gravy, rolls, green bean casserole, sweet potato casserole, cranberry sauce (whole or jelled or even relish, just so there is some form of cranberries with a ton of sugar). Desserts I'm not so picky about. Pumpkin pie or sweet potato pie. Whatever. The entree is what I care about. In fact, I often eat a second or third helping of the meal AS my dessert. However, there are a few desserts I have been introduced to since I've been here that I LOVE!! They are the pumpkin roll and something called pumpkin dump cake. I'm going to try the dump cake recipe tonight and will give you a report as to how it goes. I need some kind of special pan to do that pumpkin roll so that isn't going to happen this week.

Another reason I know Ohio is not the south is this. Brace yourselves. They put oysters in their dressing and make it with loaf bread instead of cornbread. Even though I admire the Buckeyes for trying to be authentic with their Thanksgiving by putting seafood in it, oysters tend to be gritty and seafoodish, and I just can't do it in dressing.

Here is probably what was on the menu for the Thanksgiving meal those pilgrims ate: venison, duck, lobster, oysters, squash, peas, corn.
There was no sugar or ovens so no pies or cranberry relish. Most likely the first Thanksgiving by these guys, however, was a fast. After Squanto did his bit to show the settlers how to grow corn and such, there was actually some food to eat. Though nearly half of those who had landed at Plymouth Rock had died, those who survived decided instead of having a day of mourning for the dead, to have days of celebration for those who had survived. I know a lot of us are glass-half-empty kind of people, but the early Americans decided to focus on what they did have, what they could be thankful for. Then they had a feast.
Posted by Jennifer Johnson at 6:41 AM
Newer Post Older Post Home