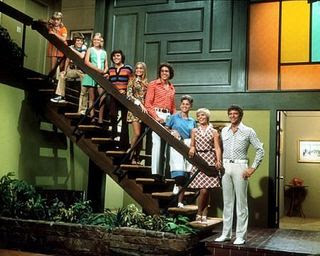 No, I'm not being facetious. Back in 2002 there was an X-Files episode which had to do with The Brady Bunch house. I think it was called "Sunshine Day", a reference to a song the Brady kids sang.

In the episode, there is a house which looks like any other house from the outside, but on the inside it is the Brady House.

Did you ever watch Brady Bunch? I did. Thanks to TBS I watched it every afternoon for years. I loved that show. I loved that a blended family could work! Heck, I loved that ANY family could tie up their crises within thirty minutes. I know of families that stay in crisis for decades, so I love this cotton candy reality we know as escapism. I especially loved that six kids could share a bathroom. I didn't think that so many people sharing a bathroom could happen in reality. Interestingly enough, my husband was one of six kids. He was Peter in the Brady family except it was not a blended family, the dad wasn't an architect, and there was no maid named Alice. But The Brady Bunch didn't have a cow to milk though my husband's family did. Wouldn't that have made for some great episodes? If the Bradys had had a cow, Cindy and Bobby would periodically have to go get on their bikes and look for her as she maybe had gone down the road to visit the neighbor bull. And maybe she gets hit by a car (either Cindy or the cow, either would work). Or, perhaps there would be an argument as to whose turn it was to milk the cow. And maybe Peter would pay Bobby to do this (as what I understand DID happen in the REAL non-blended six kid family). The kicker would have to be, though, when Jan in a fit of rage sold the cow to Sam the butcher because Marsha and the cow had won a prize in 4 H, while Jan and her pig got nothing.

Ah, I loved The Brady Bunch.

So, imagine the uneasiness I felt when I watched this episode of the X-Files in which this house was just like the Brady Household inside. And people found out about it. And sometimes bad things happened to them when they would trespass inside. Oh, my gosh, the goosebumps I got when the special agents went in the house and there were Cindy and Bobby standing at the end of the hall upstairs.

Those kids are grown people now! Something is wrong. You must leave or something very bad is going to happen to you. Ahhh! Get out! Get out!! RUN FROM BOBBY AND CINDY!

And there Bobby and Cindy stand. Silent. And scary because you know it couldn't really be them. And there's scary music, played in the minor key. Bad things ALWAYS happen in movies and TV when the minor key starts playing. I tell you, I hear that kind of music somewhere, I'm making a quick exit.

Hence, I will never star in my own scary movie. Nope. I could only be in a scary commercial. Something creepy happens, I do not go and investigate. I wave goodbye and I'm out within 30 seconds. Blood oozing from the walls? Umm. No. I will call the police from the neighbor's house. I will ask them to please get my pets out, or leave them there. I will look closely at my homeowner's policy and hope there is a clause for paying off the house and selling it quickly (without disclosure) if the house is haunted (by Bobby and Cindy especially).
Posted by Jennifer Johnson at 6:51 AM
Newer Post Older Post Home